Starting work on a new illustration- again working around the same concept as Pygmalion - a futuristic version of a fairy tale or in this case, a nursery rhyme. Little Miss Muffet meets Alien. I usually work through a number of thumbnail roughs to get an idea of the overall composition but in this case, I had a strong sense of what direction I wanted to go in. 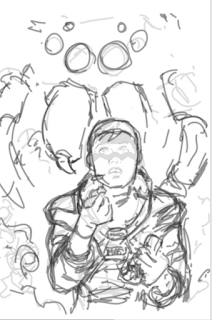 The next step is to define the tonal structure of the illustration, blocking in the plan for the black and white shapes. When working with a pen and ink approach, the problem is how to translate the shadows graphically since the range of values is strictly black or white with some occasional hatching to create a transition between these areas. 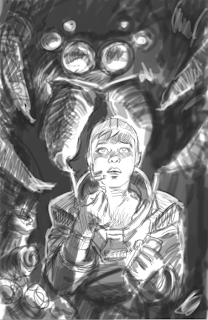 Since I know that the final color treatment is going to also define the tone and lighting, its important (in my approach) for the inks not to get to fussy with excessive crosshatching. I try to allow as many open, or white, areas as I can to allow room for the color to breathe.
Now that I have a decent roadmap, I'm ready to lay in some tighter drawing. This is a lot like the pencils stage of rendering. Using Photoshop on a Cintiq tablet, I work with on a transparent layer with a soft edged brush- variable opacity and fixed width at 70% black.
I could go right to final inks but to me its important to work out the details such as anatomy and lighting  to allow me to achieve the right look to my inking of the next layer. 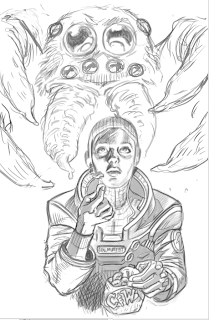 Posted by erlickimages at 3:42 PM